Discussion about the process of creating documentary and biographic comics with Angela Djurfelter, Emma Heinonen, Jesse Matilainen and Taina Hakala. In April 2016 we spend four wonderful days at Villa Salin residence by seaside in Lauttasaari. Thank you for all wonderful people for participating <3 (Next Salin Comics Camp shall happen 10.-13.4.2017 follow this blog or our facebook for more information later.)

Residence was for anybody who has interest in making comics from feminist point of view. In example creating comics about experiences from people who usually are not so well presented in media or entertainment. Or recognizing i.e. social structures, effect of class, gender, poverty or wealth, good or poor health… 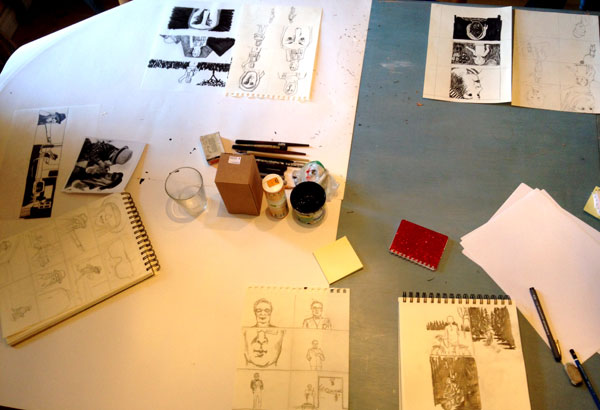 We started every day drawing quick croquis exercises to free our drawing hands and taking over possible fear of the white paper.

We had different timelimits (from 4 minutes to 15 sec.) and instructions – draw with your weaker hand, draw with only one line, don’t lift the pen, draw looking only at the model, not the paper and so on. This is for to flip us from our usual manners in drawing and to avoid fear of ”making mistakes”. Just draw, don’t worry how it looks like, it develops your skills in drawing and observing anyway! 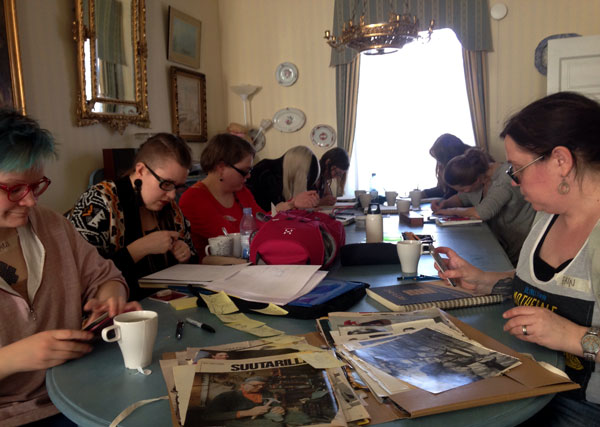 On Monday we did storyboard (script using only images) as group work. In this ”space shuttle” exercise only images, no text is allowed. So it makes you think best way to put your story in pictures, making as effective and informative pictures as possible, since you are not allowed to explain things in text. Even though I highly do appreciate union of text and pictures and good dialog as well, it still is really useful to learn to express things in images, to avoid explaining or telling them again in text. 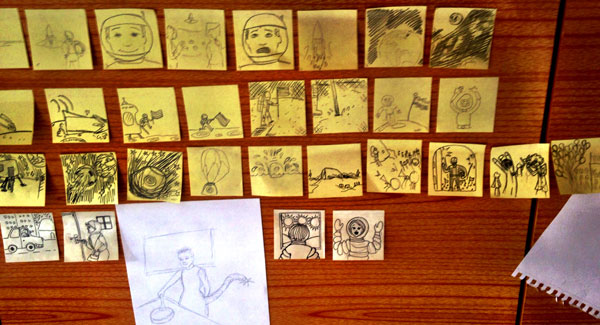 Of course it usually means more work in drawing, but one can also develop skills on focusing on what is important and reasonable for the story to be shown.

This said, also developing and describing atmosphere of the story or characters with many pictures where not so much action is taking place can be really rewarding for reader. 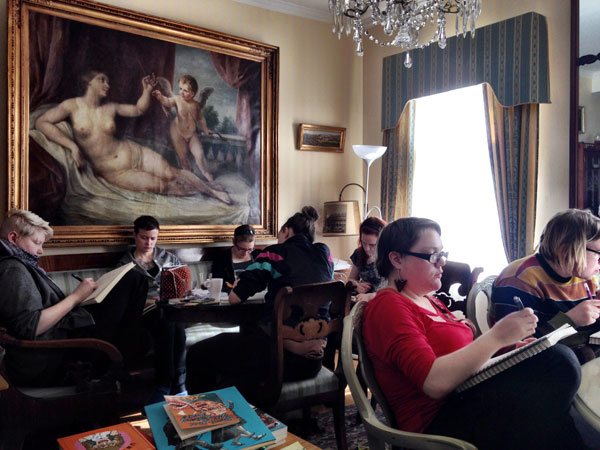 On Tuesday we did memorising exercise from Lynda Barrys book What it is. Barry has many great exercises for remembering things by writing, asking questions and answering them. Exercise was for writing but we had drawing as an option too.

On Tuesday afternoon we had a workshop by Mustikka. ”How best to promote animal rights? Could part of this be to recognize our own animal predecessors and nonhuman becomings? How could art help here? Does art have a genealogy that links it to the sexual forces of different animals as feminist philosopher Elizabeth Grosz suggests?” were some of the questions asked in the workshop. On Wednesday we worked with a character, real or fictional and wrote a background story about this character. It gives substance to your characters even though you won’t tell everything you know/came up writing background story. On Wednesday we also had show and tell day, opportunity to present own projects. It’s useful to train yourself also to talk about your work and process behind it to other people and have some response and encouregement.

Jesse Matilainen told about his album project, Suomen Suurin Kommunisti (Greatest Communist of Finland), which starts from civil war and ends to year 1939. Interesting to hear about the amount of work when gathering information about everything for the story, characters and surroundings.

Hanna-Pirita Lehkonen talked about her work making famous webcomic Immortal Nerd. ”Nokia is a young adult, living on a space station New Rauma. Nokia has just gotten their immortality and the best use they can come up with it is to browse the old internet all day long without eating or sleeping and not having to worry about dying of hunger. After three weeks of old internet Nokia’s parents decide they’ve had enough.” To H-Ps delight her comic with non-binary main character has become really popular. Hanna-Pirita Lehkonen, our respects for getting paid for webcomic.

On Thursday we draw character in different framesizes. And we made a useful black/white exercise, which I’ve learned from Marko Turunen. Draw three panels with your character, one which you use black for 33% of the image, one with 66% and one with 90 %. By using different amounts of black (light/shadow) you can create more interesting panels. And we did some quick four panel comics for exercise too. Paper is divided in four panels, first person thinks and writes texts in panels, pass the papers, next person draws characters, pass the papers and third person draws surroundings. Below you can see these quick exercises made together, time for each stage was 5-10 minutes. 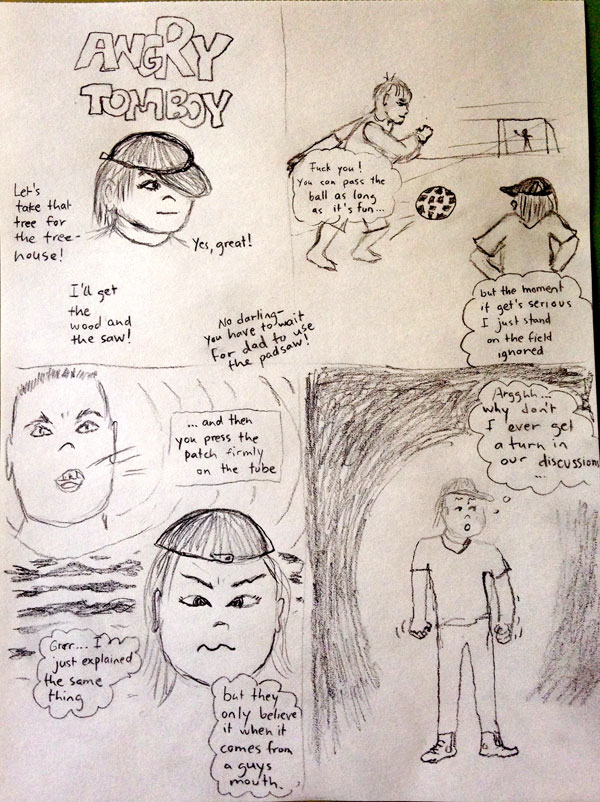 All drawings by and with permission of participants.

I also emptied my bookshelf for residence to have many examples of different styles and different themes. I see it really important to have wide range in stories we read and watch. I could recommend any of these books, but as few examples…

Some stories from life of young girls,

Sanna Ala-Ojala’s Huomenna on se päivä (Tomorrow is the day) based on her teenage diaries,

Sara Hansson’s Vi håller på med en viktigt grej (We have an important thing going on) story about friendship, being misunderstood by the world – schoolmates, fathers etc… How come they don’t get it that Spice Girls is our life and always going to be?!

Esther Pearl Watson’s Unlovable, based on a found diary of teenagegirl. Nina Hemmingsson’s Minä olen tyttöystäväsi nyt (I am your girlfriend now) and Snyggast på festen (Coolest in the party) deals a lot with depression and it’s affects on ones life using black humour and razor sharp observing when it comes to society and it’s codes. I also chose many books that deal with themes that still are quite hard to discuss and even stigmatized.

Tiina Pystynen’s book Ystävänä yksinäisyys (Loneliness, my friend), gives a raw view how it can feel to be alone when one doesn’t want to.

Her earlier work, Leskikuningattaren muistelmat (Memoir of Widowqueen) describes life as a singlemother after her husband, father of the children has committed suicide.

Emmi Nieminen’s Keskiviikko (Wednesday) is about trying to heal after childhood shadowed by alchoholism of familys father.

I also brought some brilliant books about mental health problems.

Lisa Mandel’s L’Asile d’Aliens is based on her interviews from her parents who both worked in asylum for a long time to see brutal treatments still used in 1960s and also new trends taking over in 1970s.

Comics can also be gentle way to handle difficult, painful or delicate themes that may not be the most popular topics around coffee tables.

Ville Ranta’s Isä on vähän väsynyt (Father is a bit tired) is based on comic diary describing time that is expected to be happiest of ones life: being parent of a newborn child. Rantas book is an honest read about how exhausting and wearing this period with small child can be.

Cyril Pedrosa’s Kolme varjoa (Three shadows) is based on experience of his friend, about losing a child to uncureable illness.

Hanneriina Moisseinen’s Isä (Father) tells the story of disappearance of her father, and how unsolved, heavy mystery takes its toll on remaining family. Book can also be seen as kind of theraphy process (I think) and final conclusion to deal with the burden of living on without never finding out what really happened.

Comics can also be used documenting history, as in Birgit Weyhes Im Himmel Ist Jahrmarkt, where she documents her family tree, giving us glimpse in the past society in Germany, troublesome familyrelations, peoples choises and the consequences in life.

Aapo Rapi’s awarded Meti is based on stories his grandmother tells about her life. Both, grandma and son have kind of stoic sense of humour which makes this colourful book a hilarious read, even though life hasn’t always been so easy.

Tiitu Takalo’s Minä, Mikko ja Annikki (Me, Mikko and Annikki), tells history of one block at Tampere, old working class town. At same time it describes changes in society and coming to this day it becomes partly autobiographical as well.

Liv Strömquist’s Kunskapens frukt , reveals history of feminine genitals, incredibly dumb theories and beliefs that were put in action with no second thoughts and caused loads of useless, pointless suffering among millions of women. Strömqvist uses a long reference list so this is really actual stuff, not any gut feeling guessing.

Reading this gives one creepy chills.

And most importantly, make comics, start and continue!

Where to find feminist comics and meet the artists in Helsinki Comics Festival? Check out updated information at our Facebook event.

View this group on Goodreads »